Everyone wants to get better at photography, but what sets apart the beginners from the seasoned experts who get paid to travel and work around the world? How do you take really great photos?

In this custom workshop + travel experience, we combine a photography workshop with sightseeing in the Grand Canyon, Antelope Canyon, and Horseshoe Bend.

By the end of the weekend, you’ll be feeling comfortable shooting in manual mode on your DSLR, and you’ll have great images and memories of our three days together. 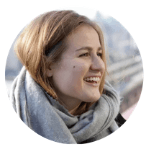 Bryn is a filmmaker and photographer whose work focuses on portraiture. She believes in empowering women through film/photography.

Bryn has worked in over fifty countries and five continents, producing for publications such as Reuters, Spin Magazine, Glamour Magazine Germany, NPR, Vocativ, and MSNBC. She post-produced a short documentary for Mumford and Sons and a DACA PSA “Are you afraid of Monsters?,” which was an honoree for a 2018 Webby. Her music video for Kadhja Bonet was featured on NPR’s “Songs We Love.”
This year, she worked on the feature documentary Roll Red Roll, which premiered at Tribeca Film Festival and screened at Hot Docs. She produced a video for Van Jones’ #StillNotFree campaign as part of the Jay-Z 4:44 tour.
Bryn is a shorts programmer for the Tribeca Film Festival. This year, one of her selections was screened in a Whoopi Goldberg shorts package. She runs with the idea that this means she and Whoopi have the same taste in film.
Reserve this trip with a non-refundable deposit, or pay in full. The balance of your tour is due 60 days before departure.

Today you’ll arrive to Flagstaff, either via Flagstaff Airport, or flying to Phoenix Airport and taking the shuttle north. For those who arrive earlier than 2 p.m., we will have the options of things to see and explore within the Flagstaff area.

In the evening, either after or during dinner, we will host a 2-hour photography workshop where will you will learn basics of photographing, framing, editing and how to take photos manually on your DSLR in any light. You will build on the training throughout the weekend. 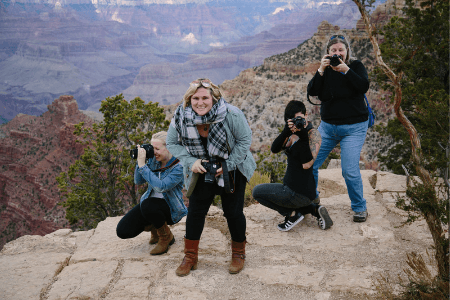 After breakfast at our hotel, we’ll set off to explore nearby Sedona, famous for its red rocks and energy vortexes. This is a gorgeous little city, so we’ll have some time to walk around and shop before visiting one of Sedona’s most iconic landmarks: a chapel built into the red rocks.

We’ll have lunch in Sedona, before heading to one of the 7 Wonders of the World: The Grand Canyon.

Our goal today is to take in the Grand Canyon at sunset, so we’ll aim to arrive at about 3 p.m. to explore different viewpoints covering nearly 25 miles of the South Rim, before reaching our favorite sunset spot.

Options for dinner after the Grand Canyon will be presented, and we can decide independently as a group or as an individual what you’d prefer. 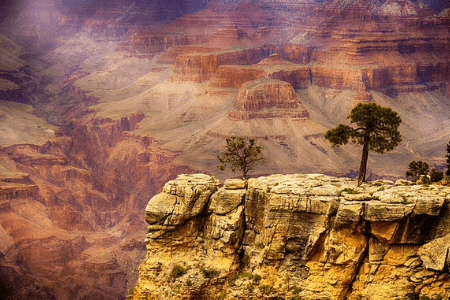 Spend a day visiting two of the most iconic landscapes in the American Southwest: Antelope Canyon & Horseshoe Bend.

This morning after breakfast we will drive towards Page. The drive will take us about three hours, but we will stop along the way. We’ll reach Antelope Canyon around 11 a.m., where we’ll have a picnic lunch before your canyon visit.

Antelope Canyon is owned by the Navajo tribe, which places restrictions on visitors and schedule, so you will be joining a guided group tour this afternoon. Your Navajo guide will do a great job explaining to you the fascinating history of one of the most stunning slot canyons in the world.

After your tour, we will visit the famous Horseshoe Bend, where you can peer off the edge at the mighty Colorado River and grab some truly incredible photographs.

After the tour, we will return to the hotel and discuss dinner options. 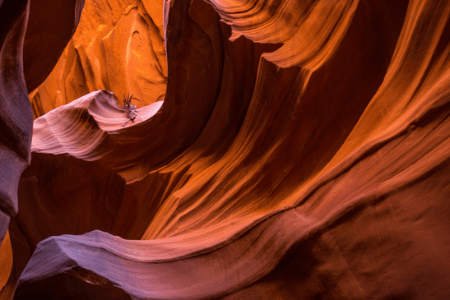 We hate to see you leave but we’re so glad we got to spend time with you! After breakfast today, we will begin airport and shuttle dropoffs. We’ll also create a shared folder where we can share our photos and contact info. 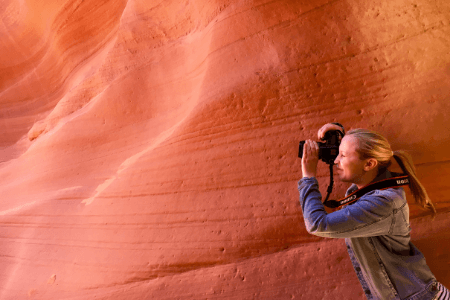 We stay at the La Quinta Inn in Flagstaff. The property is newly refurbished, and the hot tub is the perfect way to unwind after a day of sightseeing! If you are arriving the day before, please book your room here.

Please note, all our tours are sold as shared rooms, meaning you will be rooming with 1 other person. Don’t worry — our ladies tend to be awesome! And we will be out exploring most every day.

Workshop Do I need photo experience?

You do not need any experience to enjoy this workshop, however, some familiarity with your camera and its settings will go a long way

The tour will begin with a 2-hour workshop that will cover photography basics suited to your needs with your DSLR.

The workshop leader will go into the basics of each element and throughout the next 2 days will show you hands-on techniques to get the best photos you can with various elements.

While we will be doing a lot of traveling, make no mistake: this is a photography tour, and the emphasis here will be on perfecting photos from setup to edit.

Questions and one-on-one discussions are encouraged, and everyone is invited to bring their own individual knowledge of these mediums to better the group experience.

Camera Do I need a camera?

Yes, you will need a DSLR camera to get the most out of this tour.

Flights Where should I fly into?

Choose to fly into Flagstaff (FLG) or Phoenix (PHX).

If PHX is a more convenient or affordable option for you, Groome Transportation offers daily shuttle rides from Phoenix Sky Harbor to the Flagstaff Amtrak station, where we will come to pick you up.

Please send us your flight confirmation for whichever airport you choose.

Let us help you

If you would like for us to handle your flight booking for you, please email us at info@damesly.com

Money How much will I need to bring?

The amount of money you’d like to bring with you is totally up to you, but we recommend bringing $10/day to tip our tour driver and an additional $30 per evening for dinner. $50/day will have you sitting pretty.

Yes, we require all participants to have insurance during our adventures. Check out World Nomads to get the process started.

If you are American and have a nationwide policy, please double-check that you will be covered by your provider in Arizona.

Cancel 30 days before a tour and receive a full credit or a refund, minus your deposit.

How we're keeping you safe on our small group tours. Read our COVID-19 Policy.

Want your own room? We've got you! Request to upgrade to solo or make this tour private.